Our mission is to provide an environmentally responsible fundraiser to all types of organizations through the collection of used cellphones/PDAs and electronic waste.

"This fundraiser is for my 12-year-old sons soccer club. There are 15 kids on his team, and this year they were all grumbling about collecting money for their annual kick-a-thon, so they agreed as a team to ask for 20 phones/ink cartridges each (as suggested on your website). That was our first two mailings.

I then posted our fundraiser on the clubs website http://www.eastsidefc.org/frameset.php and asked the other 20 teams to also collect their cell phones and ink cartridges and help us meet our goal (the boys need to raise $150/player). I made a bright drop box that I left at the fields twice a week for the month leading up to the kick-a-thon, and then reminded the entire club again to bring all their phones to the kick-a-thon. I was AMAZED at how many people brought phones, and there were several other teams who had been collecting phones for us as well. The phones filled up my phoneraiser box, as well as two more boxes!

People I didnt know were thanking me for this opportunity! And what a great opportunity it was! We will continue to collect phones throughout the year, and more than likely, into the years to come. I hope to have another large shipment after the holidays (and folks get new cell phones for Christmas)."
- Sandy Karlek
"This fundraiser has been and continues to be great for us. In June our baseball team is going to Cooperstown NY to participate in the Cooperstown Dream tournament. PhoneRaiser is now our only fundraiser. We had another fundraiser scheduled but decided to cancel it after we realized how successful working with PhoneRaiser could be. We have raised $5,000 in five months!"
- Rachel Burns
"Phoneraiser has been the most effective fundraiser I have ever done! It allowed the people we serve, as well as, our volunteers to participate and make a difference without requiring a lot of money or time on their part. It also required little to no time on my end. Yet, the outcome was amazing! After a few emails and facebook messages, in just a few months we collected over 1000 phones and raised over $5,000.00. This money will send over 15 children with disabilities to our summer camp and provide them with adventures they will never forget. Thank you so much for not only helping us raise much needed funds, but also allowing us to do something so good for the environment."
- Cecy Lowell / Camp SMILE, United Cerebral Palsy of Mobile
"Has run very smooth so far, checks are cut in a very timely matter."
- Loraine - Bulverde, TX
"It was so easy to do, once word got out, everyone started bringing in phones. I have never done such an easy fundraiser."
- Sonja - West Monroe, LA
"It was a great experience I would recommend to anyone!! Fundraisers can be so hard sometimes but this was a piece of cake!!"
- Catie - Clearwater, KS
"I was very pleased; this was such an easy project. I loved not having to worry about shipping costs. I compared Phoneraiser to other programs who claim they pay more. I know Phoneraiser is the better program."
- Angie - Tarboro, NC
"I am very impressed with Phoneraiser. You are people of your word."
- Dennis - St. Louis, MO
"So far, excellent. Fast payment was appreciated; we expect to raise enough funds to purchase a new computer for our computer lab by year end."
- Debra - Kissimmee, FL
"This was the easiest fundraiser I was ever involved in. It required the least amount of time and was by far the most profitable. Plus, we werent asking for money from the families involved-just something they already had just sitting in their home collecting dust."
- Annie - Hanover Township, PA
"Very positive, there is good communication; they make it as simple as possible. The checks were sent very promptly."
- Jan - Lombard, IL
"Awesome! A+"
- John - Marion, IL
"Very simple, no brainer fundraiser."
- Wanda - Garden Grove, CA
"I would just say that the Phoneraiser is a great fundraiser for our group. It allows us to raise funds without having to ask people for money but use their recyclables and then benefit from them. It is so easy to walk around and ask people for their old cell phones. We have raised over $1000 to help students go on mission trips and it was so easy! It only took a few weeks for us to have the kids collect the phones and then ship them off. The check came back very quickly. I am very pleased with how the Phoneraiser works!"
- Grant - McKinney, TX
"All in all, yes, working with Phoneraiser wasnt really work at all, not like some fundraisers are work! People were surprised that we could make money recycling old phones."
- Leslie - Midland, TX
"I am the Technology Curriculum Integration Specialist at an elementary school and am in charge of fund raising for extra technology equipment. This past summer and fall we were able to collect enough cell phones to receive a check of over $1,000 from Phoneraiser. We had no idea our efforts would pay off in such a wonderful amount. The money will be used to purchase two digital video recorders for our teachers to use with their students. The process is next to effortless with a huge payoff thanks to the support and organization of Phoneraiser."
- Donna, TCIS / Lee Hall Elementary Newport News, VA 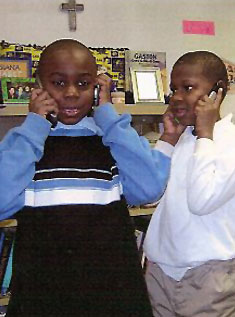